Spreading The Love Of Dance 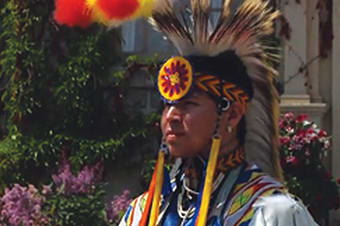 Even at the age of 21, A. J. Elliott realizes the impact the Dreamcatcher Foundation had on him growing up as a teen trying to stay out of trouble. He wanted to take part in positive activities and perform hobbies that would keep him involved with the youth around him instead of on the street. Elliott had a passion for dance and he called upon The Dreamcatcher Charitable Foundation so that he could help non-Aboriginal kids learn how to dance. "It was so cool to see the others wanting to learn from me how to dance and be part of our Native programs," says Elliott. "I look back and am amazed at their interest."

Although smiling now, there was a point in time where Elliott didn’t know where the money would come from for his travel expenses that he'd incur while teaching the kids. "I was scared and I wasn't sure what to do," he continues. Elliott’s mom suggested he contact the Dreamcatcher Foundation, since they had helped other family members by granting their wishes. He filled out the application with his mothers help and his dream came true.

Elliott became part of the visiting school program and travelled around teaching kids about where the Grass Dance came from and what it meant to his community. Now as a young man he’s been able to use this exposure to various groups of youth from many backgrounds to enhance his future plans. "I want to continue going to school and in the fall I’ll decide on a major and keep pursuing my dreams."

Dreamcatcher is proud to present our Mother's Day Draw.

It is with a heavy heart here at the Dreamcatcher Charitable Foundation, we mourn the passing of our eldest and wisest board member, Vera Styres.