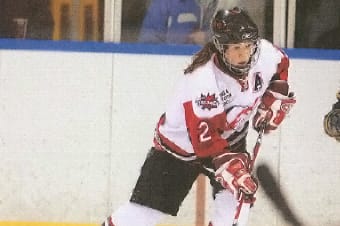 The Babstock family are like so many Aboriginal families in Canada. They have always lived in Toronto but try to go to back to their families home in Wikwemikong, Ontario in the summer time. They have six children that are all active and like to be involved in their community. Donna and David both work hard to provide for their family, Donna as a server at the Woodbine Race track and David in the construction industry as a rodman. Tragedy struck their family in 2004 when David was in a severe automobile accident which left him unable to continue any kind of work. This also put the family in a financial crisis. How do they survive as a family with all the bills that an 8 person family accumulates? What kind of sacrifices do they have to make?? How do they adjust?? There is no question that adjustments are required, but where? Do they cut back on food with 4 growing children?? How do they survive?? One of the activities that all the children were involved in was hockey. They all played and they all loved to participate in the game. During all this turmoil, a cousin of Donna’s suggested she contact the Dreamcatcher Fund to see if they could help. They really wanted their kids to remain in hockey because it gave them a focus and not surprisingly, helped their kids deal with a stressful situation that they found themselves in through no fault of their own. To their surprise, their application was accepted and the Dreamcatcher helped with registration fees that allowed them to continue their hockey careers. This little bit of help has paid big dividends particularly for one member of the Babstock family. 16 year old Kelly Babstock, the 3rd eldest child in her family started playing Tyke hockey 1998/99 with the Humberview Huskies and has evolved her hockey career immensely and is presently playing with the Toronto Jr. Aeros AA hockey team. Well, Kelly’s dream came true, Hockey Canada announced on April 16, 2009 that Kelly was one of the 44 players invited to the U 18 selection camp. “She is rated by Hockey Canada as one of the top players in the country”, says mom Donna Babstock. Kelly was just notified she made the next cut for Team Canada and leaves July 23-30, 2009 in Calgary, Alberta. Kelly also excels in lacrosse with the Mississauga Tomahawks, the first girls’ team in club history, With taking on Whitby Warriors in the final game, Babstock the team captain, over the course of the tournament, Babstock notched 43 goals in 8 games. She has been very dominating in lacrosse but she is putting all her focus in hockey. “Without the help of the Dreamcatcher Fund this would probably not be able to happen. What a good role model Kelly is for the aboriginal community.” says mom – Donna Babstock. Donna says, “I don’t think we would’ve been able to manager Kelly’s hockey endeavors without your help, we know that the Dreamcatcher has given our family great support in Kelly’s hockey career as well as our other children’s over the past few years, we couldn’t have done it without your help at the Dreamcatcher. We will thank you from the bottom of our hearts. Our family is deeply indebted and truly appreciates what you have done for us now and forever.”

Dreamcatcher is proud to present our Thank-Fall Giveaway.