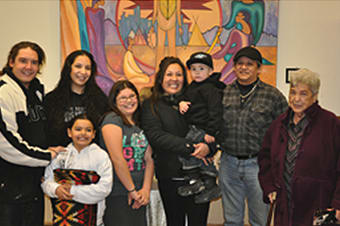 A few months ago we brought you the touching story of how Kaiya Maracle donated all her birthday money to the Dreamcatcher Charitable Foundation. Read the letter below to find out how this eight-year-old girl’s gift changed the lives of many adults and children.

By Cynthia Vanier, C.Med | Attawapiskat, Ontario | May 3, 2011
As a professional and an Anishinabek woman I find it difficult to put into words how touched I am by Kaiya and her very big heart. Some say our children wear their hearts on their sleeves ... that’s how I feel when it comes to this young girl’s generosity and her gift to a young boys’ hockey team from way up north in Attawapiskat. They share with her the simple joy of playing the game they love – hockey. These young boys wore their thanks on their sweaters for all the world to see (at least the world that supported and cared about how hard they fought to play in a tournament most teams take for granted.)

It all started when I read the touching article about Kaiya donating her birthday money in order to help another team struggling to find resources to play hockey. In addition to providing her own money, she challenged teammates to do the same, then together they organized an equipment drive. Right around that time, I received a call from a community member in Attawapiskat, desperate to get an Atom House League team to Timmins to play in a tournament. The Attawapiskat youth were disheartened ... due to the remoteness of where they live they are sometimes forgotten. They were not allstars, a rep team or future NHLers but they had dreams just like everyone else.

What happened next was incredible: take one little girl from Toronto, aware that although her family had elected not to live on reserve, she was sensitive to the needs of those living so far away – that these boys were desperate to play hockey.

So now, how can “thank you” be enough to express their gratitude? Instead, the boys wore their thanks on their sweaters because whether or not Kaiya realizes, her donation would have a lasting effect on these boys and their dreams!

I received emails from the coach when they were on the road to the tournament… during one call, the excitement and frenzy in the hotel room where they’d gathered was electric. In fact I don’t think I’d heard that much laughter from these boys in all my trips to the community. Is there anything more delightful than the sound of laughter as it resonates from the hearts of children?

Kaiya, you touched the soul of broken hearts and helped them feel special and loved. Your generosity and gift awakened a spirit that had been silent. In turn, as a result of your gift, while these boys may not have had the pleasure to meet you in person, they know your heart and spirit and they skated with you every time they wore their sweater.

If we all do a little, great things are accomplished… and Kaiya, from the bottom of my heart, thank you for being you, and touching so many with your beautiful spirit.

Cynthia Vanier is a strong supporter of the Dreamcatcher Foundation and helped put the coach in touch with the Foundation.

Dreamcatcher is proud to present our Thank-Fall Giveaway.